The Through Positive Eyes global exhibition launched at the Durban Art Gallery in Durban, South Africa, in 2016, coinciding with AIDS 2016, the international AIDS Conference, also taking place in Durban. Housed on the upper floor of the Edwardian domed Durban City Hall, the exhibition presented a broad picture of the epidemic, ranging from revealing self-portraits to abstract studies, that speak eloquently of the emotions and pleasures of daily life after diagnosis with a chronic illness.

Throughout the duration of this exhibition, school and community groups were invited to share in a storytelling performance, nestled in this quasi-theatrical environment envisioned by New York-based designer Stan Pressner. The storytellers are called “artivists”—part artist, part activist—all from Durban and immediate environs. The short film shown before storytelling was by Through Positive Eyes co-director Gideon Mendel with Mo Stoebe. During opening week, which coincided with the 21st International AIDS Conference, additional performances were offered courtesy of Drama for Life at the University of Witwatersrand in Johannesburg. Ultimately, this room was meant to combine the worlds of gallery and theatre, allowing viewers to become both spectators and actors.

Until now, HIV-negative photographers have been the primary chroniclers of the AIDS epidemic. Through Positive Eyes empowers people living with HIV and AIDS to report on their own lives. The project puts cameras in the hands of the people most deeply affected by HIV, and most knowledgeable of it, in order to reveal what might otherwise remain invisible or unknowable. These photos are noteworthy as art—much of it produced, remarkably, by photographers who have never held a camera before—but also as activism, with the intent of dissolving distrust and fear. This central gallery introduces visitors to an individual living with HIV from each city in the project's history via a photo paired with a short autobiographical caption. Alongside these works, a digital composite of portraits by project co-director Gideon Mendel portrays the magnitude and diversity of the Through Positive Eyes artivist community.

My Photo. My Story.

Over the past decade, South African photographer Gideon Mendel and his London associate, Crispin Hughes, along with the UCLA Art & Global Health Center, have led Through Positive Eyes workshops in cities around the world, ultimately training over 100 image activists who collectively have contributed more than 100,000 photos to the project. That number is distilled here to fewer than 50 of the most memorable images paired with excerpts from each individual’s personal story. In Through Positive Eyes training workshops, Mendel and Hughes share basic camera techniques and also introduce a vivid discussion of photo aesthetics. Building on that foundation, each participant captures as many as three thousand images over a ten-day span, edited down to twelve of their best to complete a mini-narrative on this website. This gallery features just a sampling of the most resonant images and stories.

What is an “artivist”? A person—part artist, part activist—who creates art in order to generate positive change in the world. Variations of this term have previously been coined by figures such as Adriana Bertini of Brazil, who uses humour and sensuality to jumpstart enlightened dialogue about HIV prevention. This gallery contains commissioned works by Bertini and four of her artivist colleagues—Mandisa Dlamini, Gordon Mundie, Daniel Goldstein, and Parthiv Shah—each of whom has participated in a long history of interventions against HIV. Building upon the expansive Through Positive Eyes archive, these five—plus Ross Levinson and Gideon Mendel in adjoining galleries—offer up their unique perspectives, demonstrating in the process what it means to empathize with and embrace all members of society—especially those living with HIV and AIDS. 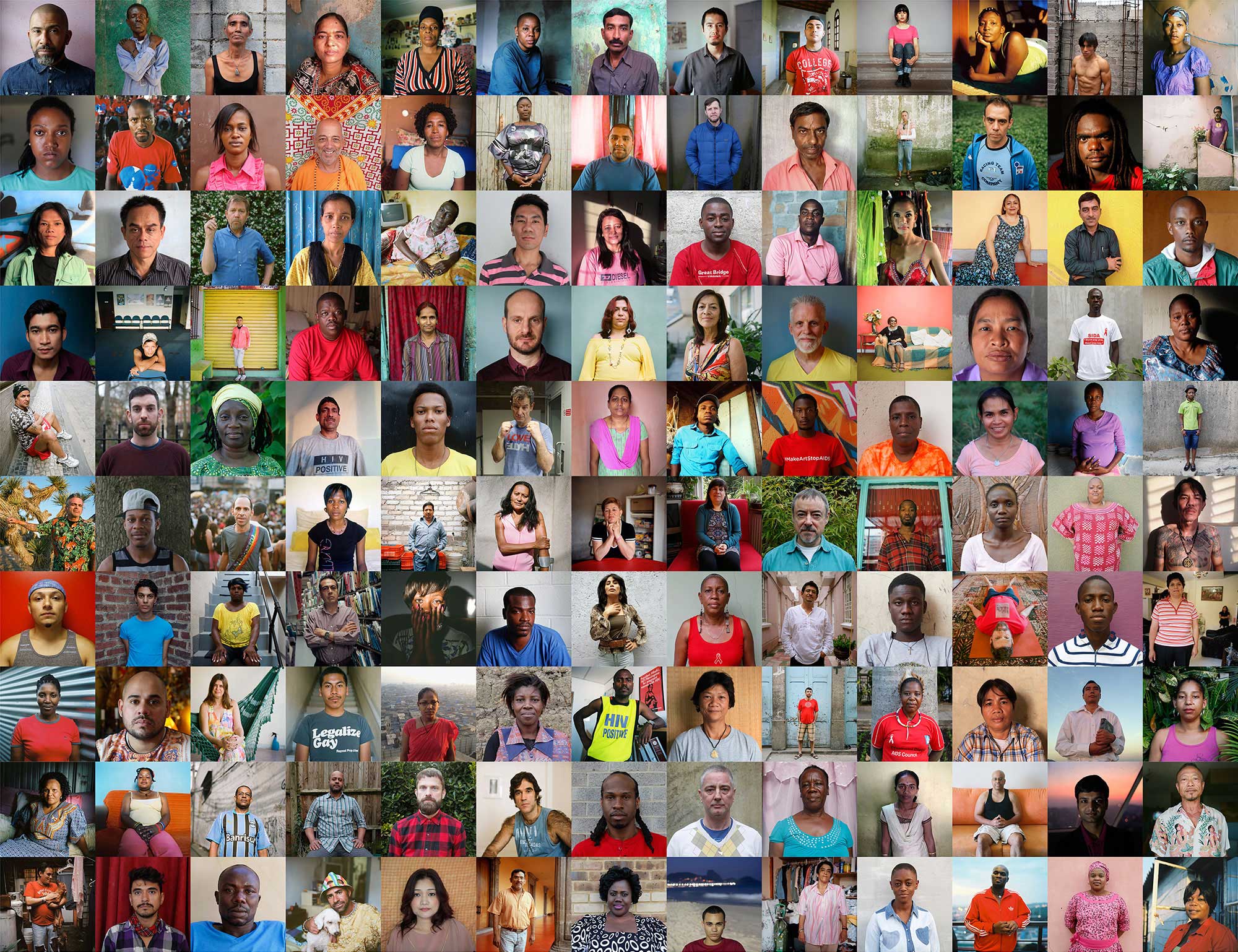 “Since 2007 I have worked with the Art & Global Health Center at the University of California – Los Angeles (UCLA) to develop Through Positive Eyes, a collaborative photo project with groups of HIV-positive people in key cities around the world. After many years documenting the HIV/AIDS epidemic myself, I felt that the time had come to hand over the camera to people living with the syndrome. The impulse for making this project has been our conviction that fighting stigma is crucial in this era of widespread access to anti-retroviral drugs. 122 HIV-positive individuals show their faces as a response to stigma, putting their words and images at the heart of the response to the disease. I began this project making a portrait of each participant. Along the way I realised that their self-representations, which fill the rest of this exhibition, were much more interesting to me.” 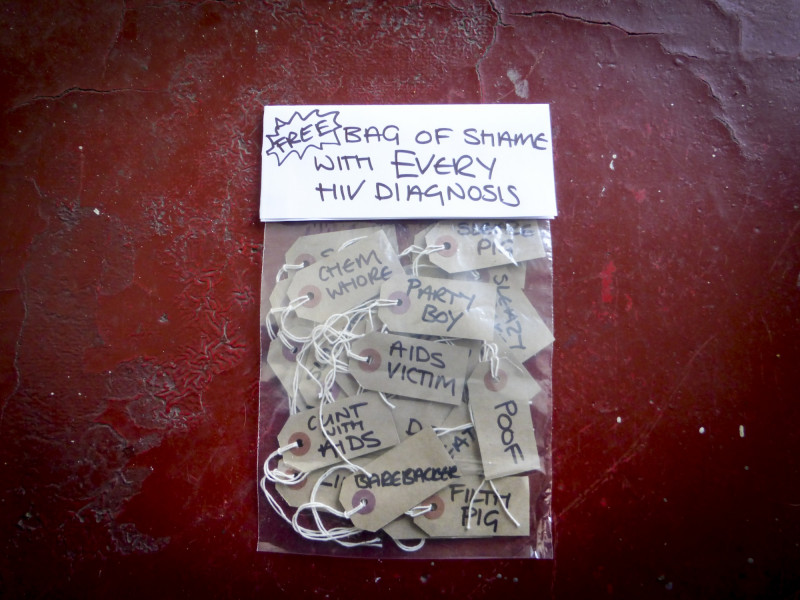 “Bag of Shame gives visual form to a collection of hurtful things that have been shouted at me in the UK. One phrase hurled by a co-worker was so offensive that my employers asked my ‘stigmatiser’ to leave. That is how bad it can be.

“Stigma is when I feel different about myself because of your feelings about my HIV. My work as an artist aims to heighten awareness of that stigma, and to influence the way you feel about people with HIV. You may be offended or uncomfortable. You might feel compassion or moved to take action. In any event, I want you to feel challenged.

“Stigma can be incredibly subtle. It surrounds us, largely unnoticeable from a distance. Look closely at the labels. If you feel uncomfortable, my job is done. That is the point.” 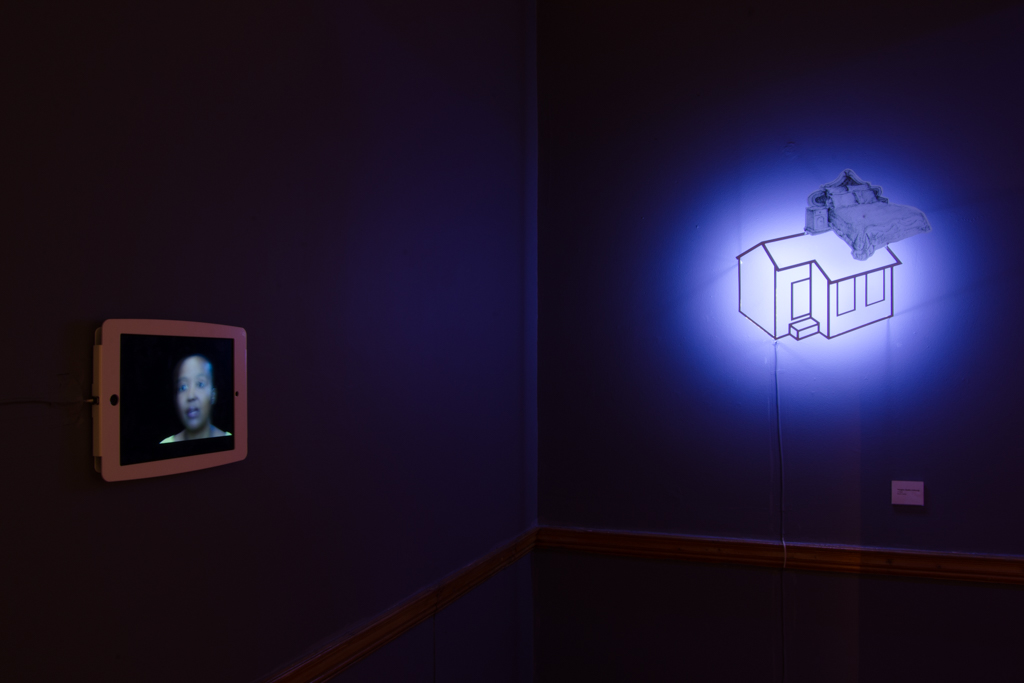 “I have never considered myself to be an artist. As director of the Gugu Dlamini AIDS Foundation, I am an activist first. But for this project I have served as both an artist and an activist, or perhaps I could proudly wear the term “artivist.” The process began with me telling my mother’s story [about how she revealed her HIV status on the radio and was stoned to death by our neighbors]. Clive Read videotaped it. Then, I collaborated with curator Carol Brown to create the banners. Karla Nixon designed them. South African artist Vaughn Sadie made the light sculpture based on my description of what happened the day my mother was killed, and how we brought her back to her bed to die. Together, we have tried to tell my mother’s story in a way that is accurate and respectful, so that museum visitors would understand the bitter truth of stigma and how hurtful it can be.” 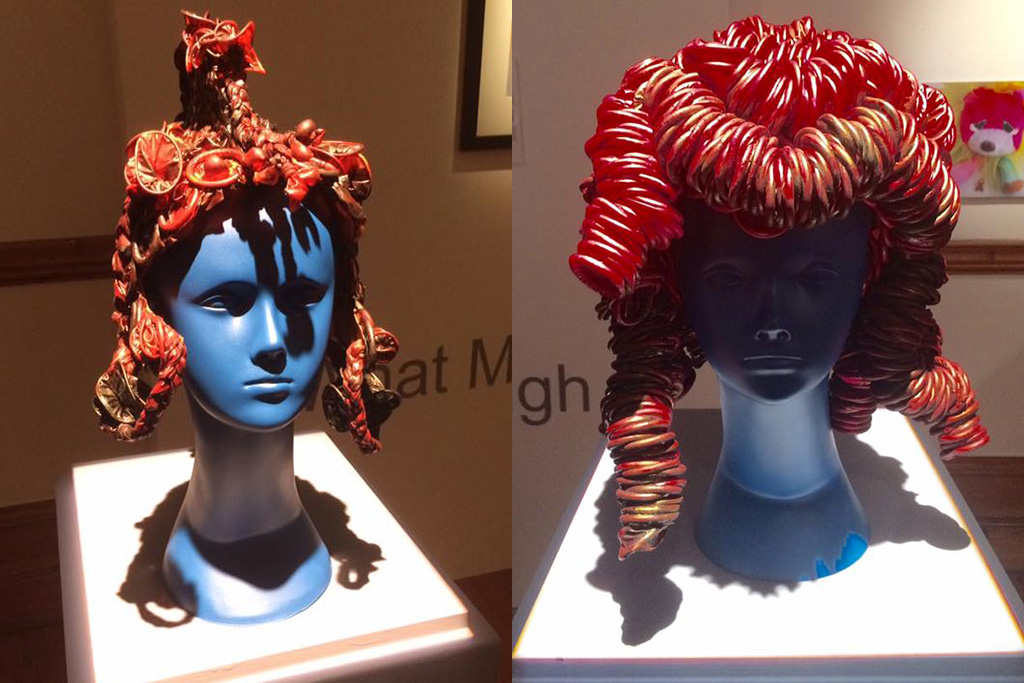 “For the past two decades, I have been creating Condom Couture—fashion made of brilliantly colored hand-dyed condoms. The idea is to represent yourself through desirable clothing, which at the most fundamental level is a way for you to wrap up and protect yourself. In the past I have focused on making condom dresses, but recently I branched out to headdresses. Hats and headdresses have been around since at least 2000 B.C., mainly to serve as protection from heat or cold, sunshine or rain drops. Taking the concept of protection still further, I have created a new kind of head accessory, part hat, part wig. I call this the Mind Experiment series, the goal of which is to ask how to change our attitudes and behavior surrounding sex. These pieces propose the importance of deep mental reflection, leading to the intense desire for change and the adoption of condom usage. The condom has to get into the head!” 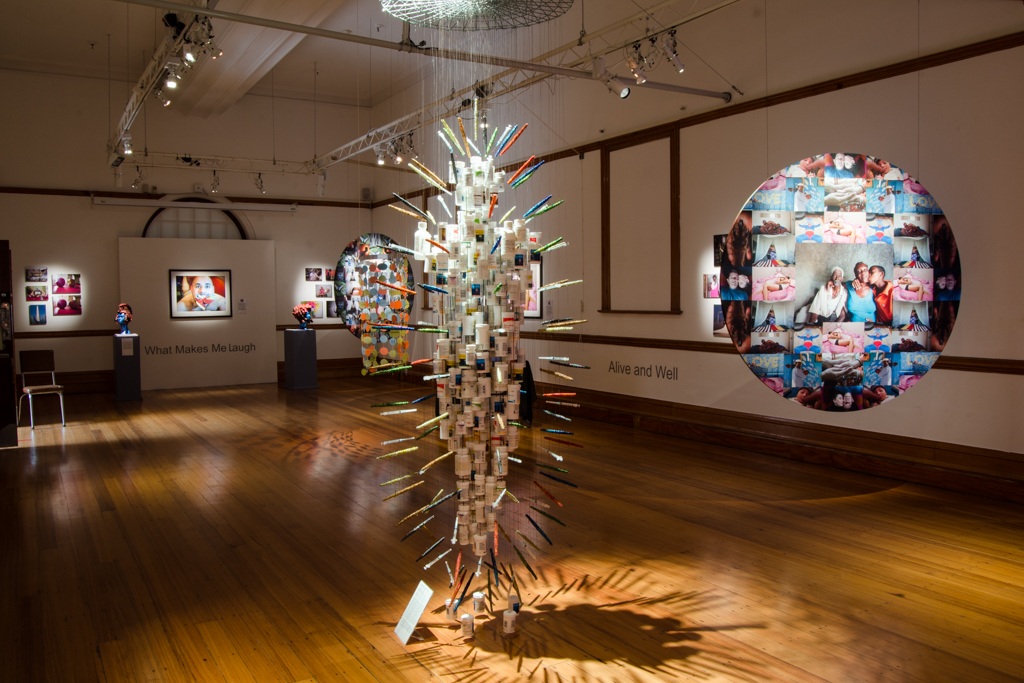 “I am an artist and sculptor who has been living with HIV in the United States since 1984. Upon travelling to Durban in 2009, I became aware that the medications available in South Africa were exactly the same toxic drugs, with serious side effects, that I had taken in the 1990’s. I, meanwhile, had moved on to the new generation of less toxic antiretrovirals available to me in the U.S. I decided to create Medicine Man for South Africa, in collaboration with KwaZulu-Natal crafters living with HIV, to address this unfair situation. All the bottles in this sculpture were donated by people from South Africa, including Justice Edwin Cameron of the Constitutional Court. The coloured spikes around the figure and the beads connecting the bottles represent the side effects of these toxic drugs.” 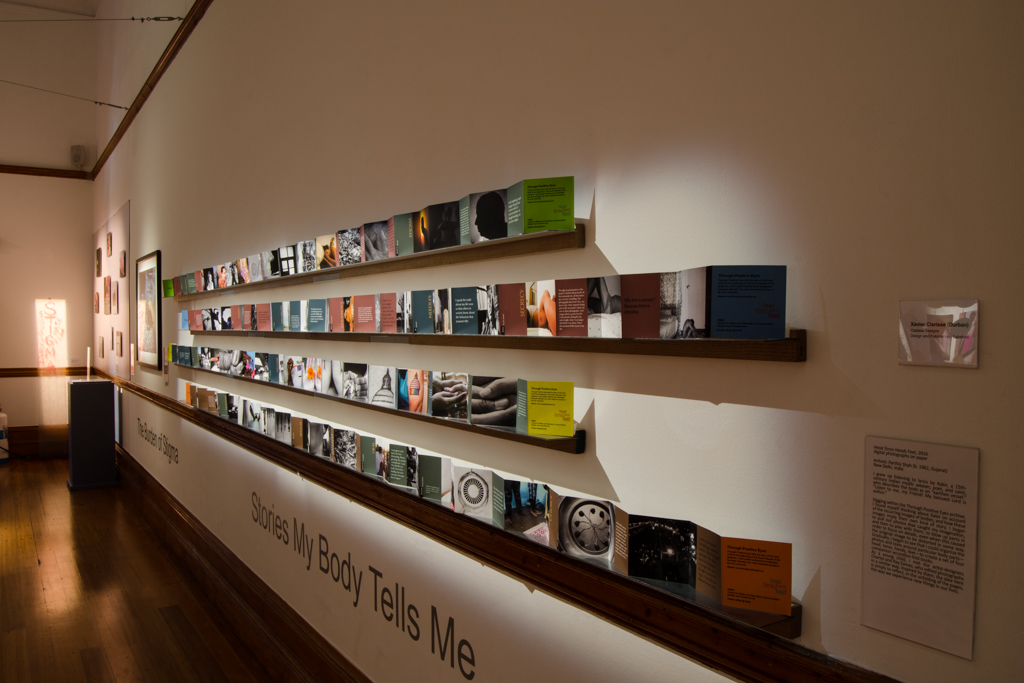 “I grew up listening to lyrics by Kabir, a 15th-century Indian mystic weaver, poet, and saint, who describes the body as an ‘earthen vessel.’ ‘Listen to me, my Friend! My beloved Lord is within.’

“Digging within the Through Positive Eyes archive, I found myself thinking about Kabir on account of the recurring images of bodies, and how these images imply their own kind of story. I began to pull out photos that caught my imagination, and then to play with them, to blow up parts in order to focus on details, even when this caused the original image to be distorted in some way. Gradually, I began to see that I could organize the photos and texts around particular body parts—head, torso, hands, feet—to create a set of four companion accordion-fold books.

“As a young child, I met the artist-designers Charles and Ray Eames, who edited photographs in a similar way. Inspired by them, the idea here is simply to reflect, in the unfolding of the pages, the way we experience new things in our lives.”

I’m an outgoing person. I love ice cream. I love to dress up. I love high heels. I love to dance. And I am HIV-positive. At birth I was taken away from my mother, due to the fact she was mentally …

I was a beautiful young girl with a charming smile. All the men loved me. When I was nineteen, I had a strange feeling in my wrist. I went to the clinic to get treatment and the doctor told me that I …

I’m a Zulu man from a rural area of KwaZulu-Natal. You can’t be a real man in our culture without having more than one girlfriend. In general, being a man means having lots of children and not …

I am a traditional healer. I am a mother and grandmother. I am an HIV and AIDS human rights activist. I work with young people and that’s where my passion is, especially for young girls. When I …

Prior to actually finding out about my status, I was riding on the assumption that HIV is for old people. I looked at it as something far away from me. It was never even close to crossing my mind. I …

I was born with the virus. I have been living with it for about twenty-five years now. I am strong. I am beautiful. I am a positive woman, in all senses of that word. And I won’t let anyone …

I was born and raised in Lindelani, a village in KwaZulu-Natal, by my grandma and my granddad. Due to the absence of my parents, I grew up in a dysfunctional family. I knew I wanted to finish school, …

When I started working as a volunteer, and then as a cleaner, for the Gugu Dlamini Foundation, I was scared, because I knew the story about what had happened to her. In 1998, a young South African …

Through Positive Eyes in Durban was organized in partnership with the AIDS Foundation of South Africa. Major funding was provided by The Herb Ritts Foundation, with additional support from The Andy Warhol Foundation for the Visual Arts, Electronic Theatre Controls (ETC), The Ford Foundation, Gere Foundation, UNAIDS, and UCLA.

← Johannesburg Exhibition (2016)
Back to top